Sold Down the River! 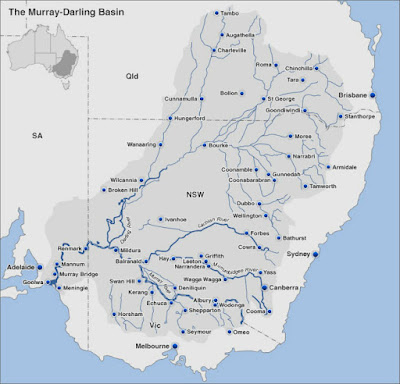 Sold Down the River. How Robber Barons and Wall Street Traders Cornered Australia’s Water Market by Scott Hamilton and Stuart Kells, (Text Publishing 2021, $35), is a book that everyone interested in the sad story of the Murray-Darling Basin should read.

The authors tell how Australia’s most precious resource was handed over to speculators at the expense of farmers, the other inhabitants of irrigation areas, Indigenous people and the environment.

From the earliest days in the late nineteenth century when irrigation schemes were established, water was publicly owned and controlled and water rights were always linked to land ownership. In the early nineteen nineties, under the influence of the Friedman economics of the “free market” which brought on a mania for “competition” and privatisation in Australia, water rights were separated from land ownership and water rights became something that could be traded or sold.

In 2004 the “National Water Initiative” made water markets the primary tool of water management. Water became just like any other commodity. It became a financial asset. Compared to sectors of the economy such as banking and finance there was very little regulation of the players in the water market - the traders and brokers who set about making enormous profits from trading water. There was no requirement for water traders to have any connection to farming.

Farmers who often struggle with poor mobile phone and internet connections found themselves in competition for water with water traders who use supercomputers and “bots” to trade water in seconds.

Many of the traders are US based banks and hedge funds. The authors detail how these parasites manipulate the water market, benefit from periods of water shortage and create artificial shortages. They milk high profits from farmers desperate to obtain water to start or finish off their crops.

The water traders ally themselves with the mega-farms run by organisations such as the Canadian pension funds. They ensure that there is adequate water for the huge plantations of almond, olives etc, while depriving productive farmers of much-needed water.

The authors call for a new model of governance for water where “we would decide as a society how best to allocate scarce water in a way that balanced all the imperatives such as efficient agriculture, river health, and recognising the cultural and economic rights of Indigenous people.”

Given the vested interests involved in the water market and the billions of dollars in profits they are making, the chances of this happening are remote.