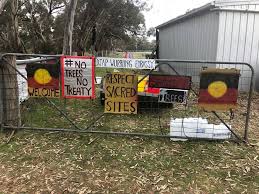 Indigenous people are putting their bodies on the line in the struggle against this and it's our responsibility to make sure we know why and to throw our support in alongside them. They are up against a constant tide of distorted news, misinformation and physical abuse at the hands of the capitalist state. This does not change regardless of Liberal or Labor governments.

One such struggle is the campaign against the removal of culturally significant trees near Ararat in Western Victoria. For over a year there has been a protest to stop a 12.5 kilometre extension to the Western Freeway because it will result in the destruction of three thousand trees of various sizes and ages including several scar trees, birthing trees (that are over 800 years old) and other culturally modified trees. To date, VicRoads has conceded the preservation of two birthing trees by altering the design of the planned extension. 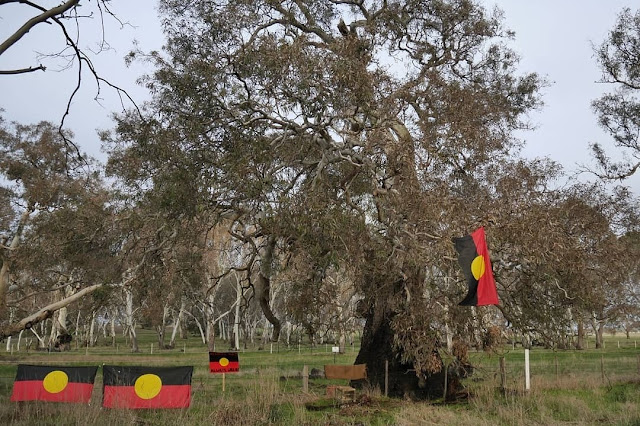 The concession to the birthing trees is not enough and has saddened and angered Indigenous people in the area. In an article published on 1st Feb 2019 in the Ararat Advertiser, traditional custodian Zallanach Gunaikurnai said “After hearing the news this morning about Major Roads Victoria being given the approval to go through, I feel disappointed to know that government still aren’t recognising who we are as a people and the connection to the country,” and he went on to say “I’m very happy that they’ve recognised the significance of those two trees, but still saddened that they haven’t recognised the landscape they sit upon”.

The protest will continue and the Djab Wurrung Embassy will stay to defend the trees and culture. The Embassy was established at the site of one of the birthing trees along the existing freeway 10 kilometres on the Melbourne side of Ararat, and everyone is encouraged to visit and learn about this issue. Nobody is opposed to the idea of the extension. There have been cheaper alternative routes put forward, but VicRoads has ignored those ideas and is planning to go ahead with the project regardless. 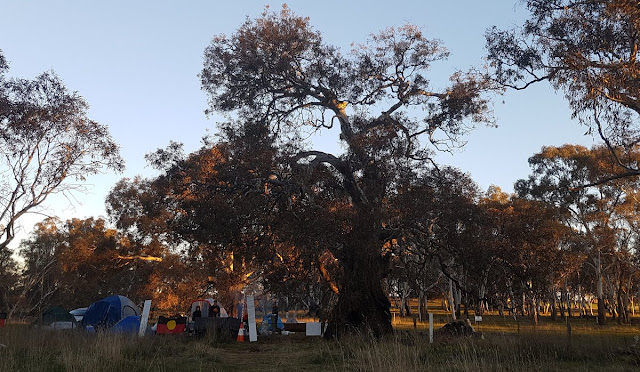 Zallanach Gunaikurnai was recently arrested for insulting a police officer and driving on an expired licence. He has been in jail for a month after being refused bail. The sentence is unusually harsh but when Indigenous people protest against the State the punishment they receive is retaliatory and unforgiving and this is the lived experience of all Indigenous people. By removing one of the leaders and spokesperson through the arrest of Zellanach, VicRoads may be hoping to diminish the struggle at the Embassy, but it won’t work. It has strengthened the resolve of the protesters and the Djab Wurrung people. They will not be part of the “quiet Australians”.

Prime Minister Morrison would like all Australians to be quiet, so they can introduce whatever laws they like and cut through all protections for the land to give the green light for sensitive projects such as Adani and uranium mining at Yeerlirrie without any dissenting voices. But that won’t happen, the voice of dissent will grow louder because there is a genuine concern for the environment and for the Indigenous peoples, there is the deep connection to country and the need to protect their Mother. (land)

In the long term, the knowledge to be teased out of all protest is that we must change the economic system. Every political win is short lived, the ruing class will concede some things but their eyes are firmly on the dollar and profit. The government of the day, be it Labor or Liberal, will bow down to the ruling capitalist class and will ultimately sell the ordinary people's hopes and aspirations down the drain.

But every win for us is a nail in their coffin and teaches us the strength we have in numbers. We must continue to fight and stand alongside Indigenous peoples to defend their rights as First Nations Peoples, so that when we are confident and ready to take on the biggest fight of them all, the fight to change the economic system, we will be united against the common enemy. That fight will come when we finally recognise that ordinary people create the wealth of this country and we no longer accept that 99% of that wealth is being stolen by a handful of corporations. We need to recognise that this theft is organised and managed by the Parliament and the State, but we also have to recognise that we have the power to change the course of history.

Defend the Djab Wurrung people’s struggle to protect their Culture and their Mother.